↓
Home
Skip to primary content
Skip to secondary content
Message from the Founder
Humanity Party was formed because, WE THE PEOPLE of the United States are suffering. Our bodies suffer from toxins in our food, our air, and our water. Our society suffers from lack of universal health care, from unemployment due to downsizing and outsourcing of jobs to cheaper labor markets, from price gouging of consumers and fraudulent and predatory practices across a range of industries, and from homelessness caused by all of the above and more.These wrongs exist, because corporations profit from them.They are allowed to continue, because our elected officials govern for the welfare of their contributors.To lean more click on our examples. Starting July 1, our monthly blog Disposable Consumer Units will expose additional wrongs.
If you want to help, click What Can I Do?

The United States’ political system was founded on high ideals. Our founding documents assure us that we have rights that cannot be taken away. The very reason for having a government is to protect our rights. 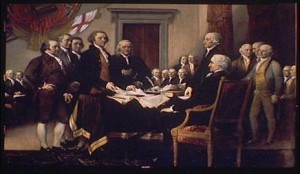 “We hold these truths to be self-evident, that all men are created equal, that they are endowed by their Creator with certain unalienable Rights, that among these are Life, Liberty, and the pursuit of Happiness. That to secure these rights, Governments are instituted among Men, deriving their just powers from the consent of the governed. That whenever any Form of Government becomes destructive of these ends, it is the Right of the People to alter or abolish it, and to institute new Government, laying its foundation on such principles and organizing its powers in such form, as to them shall seem most likely to effect their Safety and Happiness. Prudence, indeed, will dictate that Governments long established should not be changed for light and transient causes; and accordingly all experience hath shown, that mankind are more disposed to suffer, while evils are sufferable, than to right themselves by abolishing the forms to which they are accustomed. But when a long train of abuses and usurpations, pursuing invariably the same Object evinces a design to reduce them under absolute Despotism, it is their right, it is their duty, to throw off such Government, and to provide new Guards for their future security.” – from the Declaration of Independence.

Our economic system is based on the lowest level of human interaction. It rewards exploitation and oppression of the many for the benefit of the few. It is a primitive system that opposes society (a partnership) and civilization.

“The aim of every political Constitution is or ought to be first to obtain for rulers men who possess most wisdom to discern, and most virtue to pursue, the common good of society; and in the next place, to take the most effectual precautions for keeping them virtuous whilst they continue to hold the public trust.”   – James Madison

The corporations that manipulate our political system have nearly accomplished with money, what no one could accomplish with armies, WORLD DOMINATION.

Wise and virtuous men have been replaced by petty self interested people who crave power, money, and celebrity. With a few exceptions, those who govern have shown that they are willing to sell their integrity and their vote and betray their oath of office in return for corporate favor, campaign contributions, future employment, etc. Government is now run, and laws enacted, to benefit the few, not the many.

What started as a Democracy has been subverted into a Plutocracy (rule by the rich). Following are a sampling of the shameful results of more than a century of corporate rule.

Theodore Roosevelt once said, “Behind the ostensible government sits enthroned an invisible government owing no allegiance and acknowledging no responsibility to the people.” He was talking about corporations and the rich.

If Congress and State Legislatures wanted to make things better, things would already be better. After all, they make the laws.

Under corporate rule via Democrats & Republicans, our lives have no value as individuals, but only as disposable consumer units to be exploited and used and discarded as replacements become available. Corporations are not bound by morals or laws or patriotism; their only allegiance is to profit.

The economy should serve the people, not the other way around. The Humanity Party would like to re-establish a government that is really “of the people, by the people, and for the people.”

Following are a few of the more heinous examples of life under corporate rule. All examples are documented and provable or already proven in court.