This was the first rampant fraud that required taxpayer bailout after financial industry deregulation during the Reagan administration. The original purpose of Savings & Loan institutions was to promote savings accounts and enable working and middle class families to own homes.

New laws, specifically designed to let S&Ls make more money rather than promote housing, also invited fraud. They allowed broader lending authority, reduced supervision, and more ‘lenient’ accounting rules to report their financial stability. One law reduced the minimum number of stockholders of an insured institution from 400 to 1. Insolvent institutions were allowed to remain in operation, immensely compounding their losses.

Savings & Loans could be federally chartered or state chartered, and after federal deregulation many moved to a federal charter. States such as California and Texas revised their charters to be similar to federal standards. The crisis cost U.S. taxpayers $160 billion from 1986-1996, not including state chartered S&Ls.

Its chairman Hal Greenwood Jr., his daughter Susan Greenwood Olson, and former executives Robert A. Mampel and Charlotte E. Masica were convicted of racketeering that led to its collapse. Cost to taxpayers – $1.2 billion

In 1985 Neil Bush, son of then vice president George H.W. Bush was made a director at age 30. He approved a loan to one business partner for $32 million and to another business partner for $106 million, never disclosing their business relationships to Silverado’s board. That was a crime. The money was never repaid. Silverado collapsed in 1988. Bush was never charged with a crime and paid $50 thousand to settle a civil suit. A profitable three years for Neil Bush.

Charles Keating’s American Continental Corporation had purchased Lincoln in 1984. Keating became Chairman of Lincoln and by 1988 had increased its holdings, mostly in land, real estate development, and high yield junk bonds, from $1.1 billion to $5.5 billion.

Lincoln’s managers and employees convinced S&L customers to replace their federally insured Certificates of Deposit with higher yield bond Certificates from Keating’s American Continental Corporation, which was desperate for cash because of losses in real estate purchases and projects. Customers were never told that the bonds were uninsured nor of ACC’s financial trouble. 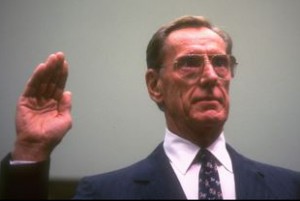 ACC went bankrupt in 1989, leaving 23,000 customers with worthless bonds and a loss of more than $250 million. Keating was convicted of racketeering and served four years and two months in prison.